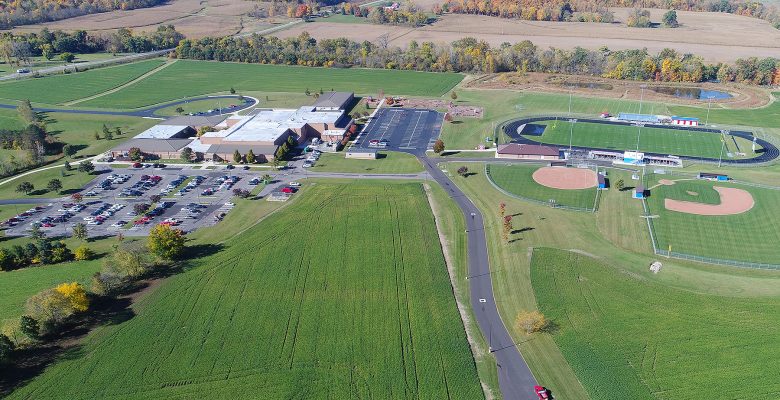 Riverside Local School District was formed by the consolidation of Quincy and DeGraff School Districts in 1960. The state of Ohio had revoked Quincy School District’s charter for having too few students, which resulted in the need for consolidation. From 1960 to 2002, the elementary facilities were housed in the former Quincy building and junior high and high school facilities were contained within the DeGraff building. Beginning with the 2002–2003 school year, Riverside Local School District merged facilities into a new building, which housed all grades, K-12. The building was built on district-owned farm land to the northwest of the former high school. All athletic facilities were replaced. The former elementary and high school buildings were demolished. As of the 2007–2008 school year, the district had 803 total students and 97 employees, 58 of which were teachers.

The record of the oldest school in Quincy dates back to the early 1800’s. The school was called the Quincy Union School and was located on the northwest lot of Walnut Street where Luther Chamber’s barn once stood. This is now in the approximate vicinity of Don Wohlgamuth’s house. The structure was a two story frame, consisting of one room up and one down.

Mrs. Dama Arthur who was born in Quincy March 25, 1849 and lived up until the 1930’s gave this recollection of the school. At the time of her birth Jackson Daniels was the teacher who lived in a small house beside the school. Dan1a Arthur was the daughter of Mr. and Mrs. George Davis. She was born in the last house north on the east side of Miami Street. Her father was one of the earliest coopers of the Village.

On April 8, 1867, the school board organized with C.H. Custenborder, president; Dr. N. V. Speece, clerk; H. Alexander, treasurer. Two other members were Levi Retter and S. M. Patton. During the same year the board decided to establish a third department and after a committee failed to find a room, Miss Sophronia Patton offered to furnish a room and teach the primary grade at $20.00 per month, if the board would furnish fuel, stove and heat the room. The board accepted her offer and she was hired. During the school year of I 867-68 the following were named as the other teachers: Miss Jennie Goble, second department; Miss Mollie Drake, second department, and J. S. Maxon, third department.

The school progressed and it was seen that a new school building was badly needed. On January 2, 1872, the board decided to purchase the lot south of Dr. Speece’s and in 1876 and 1877 the first brick building was erected by A. R. Walker of DeGraff and J. A. Clon­inger of Quincy. The former did the brick, stone and plastering work while the latter did the wood, iron, tin, slating and paint work. These men were paid $5691. Up until 1923 our school was rated third class, then it was decided to enlarge the building by adding several classrooms and an auditorium which served as a gymnasium.

In 1956 six additional class rooms were added to the north end of the original building. In 1959 there were 274 students enrolled.

In 1960 the consolidation of the DeGraff and Quincy Schools made a new district named Riverside. The Kindergarten through 6th grades going to the Quincy building and 7th through 12th at DeGraff. At this time six more class rooms were added to the north end of the building.

There were 475 students and 30 employees at the Elementary building in 1976. Ronald E. Furrow, a Quincy native and a graduate of the first Riverside graduating class, was principal at the time.

New lighting systems were added to the classrooms, the cafeteria were remod­eled with all modern equipment and in 1975 new windows were installed in the old building.

There were three kinds of heating systems, coal in the old building, fuel oil in the first six classrooms and electric in the last new addition.